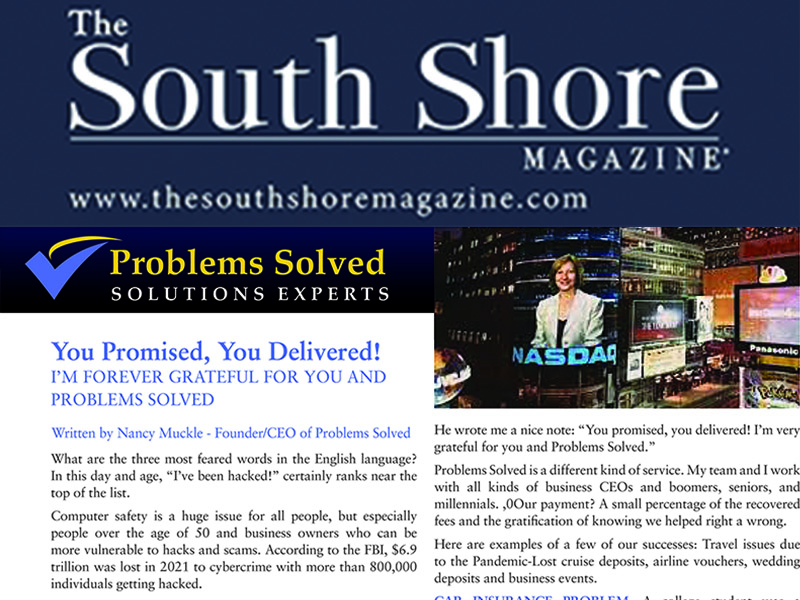 You Promised, You Delivered! I’m Forever grateful for you and Problems Solved

What are the three most feared words in the English language? In this day and age, “I’ve been hacked!” certainly ranks near the top of the list.

Computer safety is a huge issue for all people, but especially people over the age of 50 and business owners who can be more vulnerable to hacks and scams. According to the FBI, $6.9 trillion was lost in 2021 to cybercrime with more than 800,000 individuals getting hacked.

It’s a growing problem—and one that Problems Solved can help. When things go wrong, we get results for our clients by contacting the executives at a company/Fortune 500 and working the issue. Not long ago, I helped a person who said those three most feared words. His business account had been hacked and he had lost a huge amount of money. Someone got into his account and charged numerous illegal transactions as a coverup and then swept the money out of his account to a banking institution.

My client had tried to contact the company to explain the problem. When he did hear back from the company—via email— he was told that it was his fault and he was responsible. That made no sense at all to me because there are regulatory and fiduciary protections for business owners against these kind of criminal fraud activities.

I agreed to take on his issue. I am a CEO in the corporate world, so I know how to get Problems Solved hence the name of my company. From contacting police to alerting the FBI and working with many resources the money was returned to the business owner. Problems Solved! My client was over the moon. He thought his money was gone and he would never see it again. He wrote me a nice note: “You promised, you delivered! I’m very grateful for you and Problems Solved.”

Problems Solved is a different kind of service. My team and I work with all kinds of business CEOs and boomers, seniors, and millennials. Our payment? A small percentage of the recovered fees and the gratification of knowing we helped right a wrong. Here are examples of a few of our successes: Travel issues due to the Pandemic-Lost cruise deposits, airline vouchers, wedding deposits and business events.

CAR INSURANCE PROBLEM—A college student was a passenger in a car that was rear-ended, resulting in three weeks of missed exams and classes due to a concussion. The day after the accident, a leading national insurance company tried to settle for $500. A lawyer from a major law firm told us the most the student could expect was $1,500. Problems Solved got her $8,000.

HOMEOWNERS INSURANCE PROBLEM—A senior had been trying to get the insurance company to pay for a damaged tiled roof on a townhouse in Florida. The firm offered $2,700 but that wasn’t enough. Problems Solved got a payment of $62,000 for this senior on a fixed income.

BUSINESS LOAN PROBLEM—A CEO applied for an equity loan on his multimillion-dollar residential property. The loan would be used for the CEO’s business. After six weeks, nothing had happened. Problems Solved contacted the bank’s president. The following day, the loan was approved for $150,000.

At Problems Solved, we find a way to get your money back. We have a team of advisors – Doctors, lawyers, contract negotiators, eldercare experts and successful business people. Need a problem solved? Contact us!