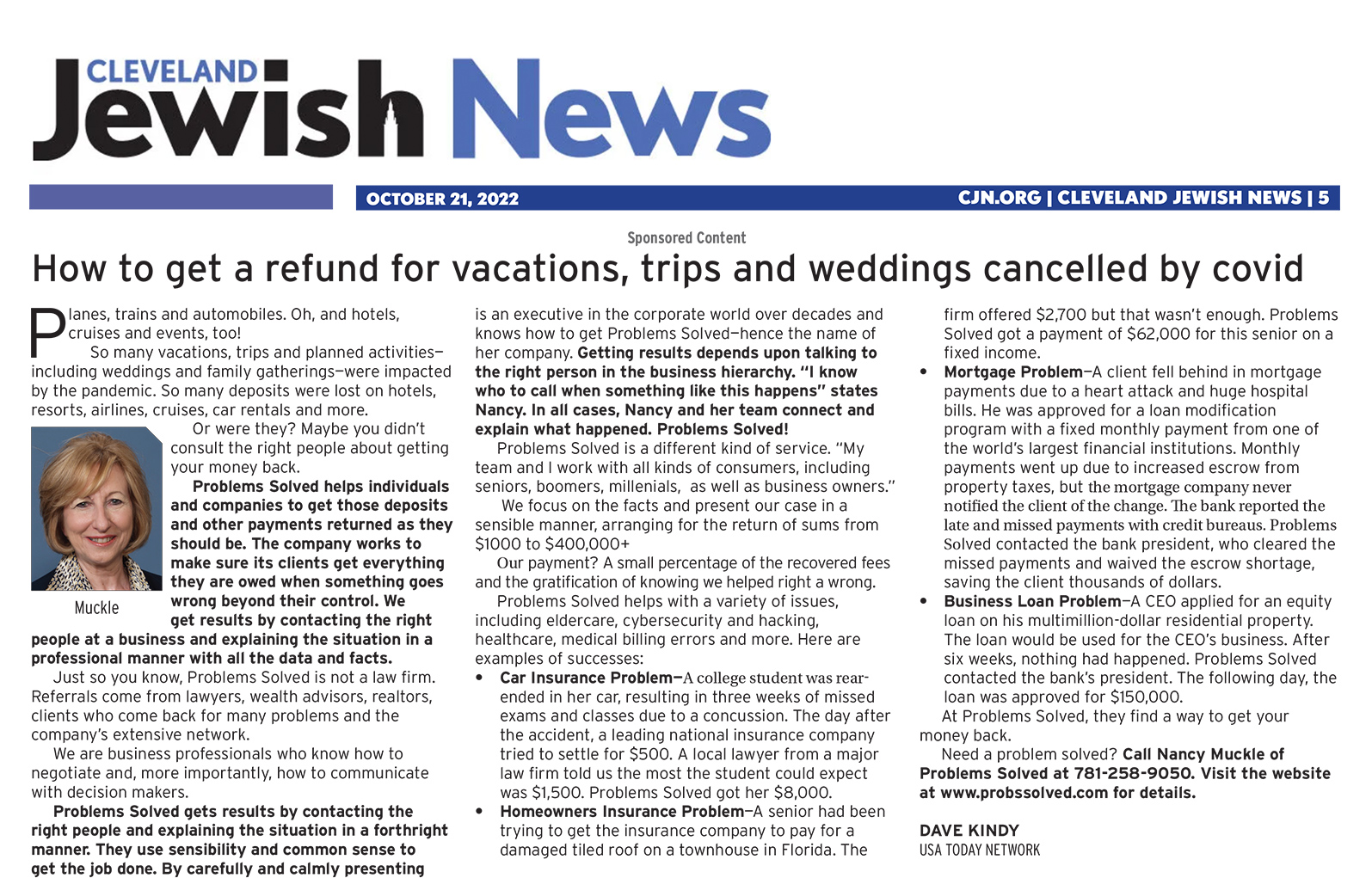 How to get a refund for vacations, trips and weddings cancelled by covid

Planes, trains and automobiles. Oh, and hotels, cruises and events, too! So many vacations, trips and planned activities— including weddings and family gatherings—were impacted by the pandemic. So many deposits were lost on hotels, resorts, airlines, cruises, car rentals and more. Or were they? Maybe you didn’t consult the right people about getting your money back.

Problems Solved helps individuals and companies to get those deposits and other payments returned as they should be. The company works to make sure its clients get everything they are owed when something goes wrong beyond their control. We get results by contacting the right people at a business and explaining the situation in a professional manner with all the data and facts. Just so you know, Problems Solved is not a law firm. Referrals come from lawyers, wealth advisors, realtors, clients who come back for many problems and the company’s extensive network. We are business professionals who know how to negotiate and, more importantly, how to communicate with decision makers.

Problems Solved gets results by contacting the right people and explaining the situation in a forthright manner. They use sensibility and common sense to get the job done. By carefully and calmly presenting the truth of the matter—“Just the facts, ma’am,” as Sgt. Joe Friday used to say—they help company representatives understand what happened so they can issue a refund. Believe it or not, this process works most of the time. Rational business people will respond rationally when provided with the details of a complaint in a nonthreatening way. They don’t want consumers thinking their companies are insensitive or uncaring. An example in point: we helped a senior couple in Massachusetts after they became concerned for their health and safety. They had purchased airlines tickets valued at $3,000 for an international trip but then decided to cancel because of the ongoing covid crisis. The couple was so apprehensive that they doubted they would ever get on a plane again. Problems Solved came to the rescue. We spoke with the couple and learned all of the details, then approached the airline. They had a full refund within three days. In another case, a couple wanted to back out of a Caribbean cruise just as the pandemic hit. The company refused to refund their money, even though they had doctor’s notes advising them not to travel. Problems Solved got involved and the couple received at total credit of $7,500 within two weeks. The key in obtaining these refunds is approaching the right people within a company. Most customer service representatives don’t have the authority to issue payments. To get results, you need to contact executives willing to take responsibility for what has happened. That’s where Problems Solved excels. Nancy Goldstein Muckle founder of Problems Solved is an executive in the corporate world over decades and knows how to get Problems Solved—hence the name of her company. Getting results depends upon talking to the right person in the business hierarchy. “I know who to call when something like this happens” states Nancy. In all cases, Nancy and her team connect and explain what happened. Problems Solved!

Problems Solved is a different kind of service. “My team and I work with all kinds of consumers, including seniors, boomers, millenials, as well as business owners.” We focus on the facts and present our case in a sensible manner, arranging for the return of sums from $1000 to $400,000+ Our payment? A small percentage of the recovered fees and the gratification of knowing we helped right a wrong. Problems Solved helps with a variety of issues, including eldercare, cybersecurity and hacking, healthcare, medical billing errors and more. Here are examples of successes: • Car Insurance Problem—A college student was rearended in her car, resulting in three weeks of missed exams and classes due to a concussion. The day after the accident, a leading national insurance company tried to settle for $500. A local lawyer from a major law firm told us the most the student could expect was $1,500. Problems Solved got her $8,000. • Homeowners Insurance Problem—A senior had been trying to get the insurance company to pay for a damaged tiled roof on a townhouse in Florida. The firm offered $2,700 but that wasn’t enough. Problems Solved got a payment of $62,000 for this senior on a fixed income. • Mortgage Problem—A client fell behind in mortgage payments due to a heart attack and huge hospital bills. He was approved for a loan modification program with a fixed monthly payment from one of the world’s largest financial institutions. Monthly payments went up due to increased escrow from property taxes, but the mortgage company never noti ed the client of the change. e bank reported the late and missed payments with credit bureaus. Problems Solved contacted the bank president, who cleared the missed payments and waived the escrow shortage, saving the client thousands of dollars. • Business Loan Problem—A CEO applied for an equity loan on his multimillion-dollar residential property. The loan would be used for the CEO’s business. After six weeks, nothing had happened. Problems Solved contacted the bank’s president. The following day, the loan was approved for $150,000. At Problems Solved, they find a way to get your money back.

Back to top
Page load link